The past several weeks have been both challenging and inspiring; a real learning experience. I am currently enrolled in the Certified Executive Coaching program at Royal Roads University. One exercise we have been put through is designed to help us become more self-aware, focusing on ‘Personal Mastery’ (Senge, 2006, Cashman, 2008). After completing a personal assessment we were directed to list, from the results, our “loads,” in six categories. 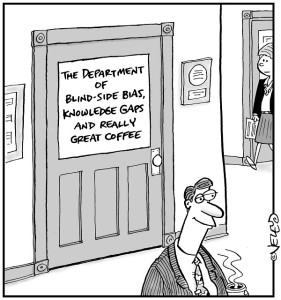 This initial assessment left me worried that I must be missing something – here come the Blind Spots – because most of my self-assessments were pretty low (the scoring went from “0” – Doesn’t weigh on my mind at all. Never give it a second thought, to “5” – Is a problematic part of my daily life and the associated problems weigh heavily on my mind). It took some good coaching by my coaching partner to get me to delve deeper into what my highest numbers, my “load,” meant and their impact on me. From her coaching I realized I still had some changes to work on and I developed a plan to address them.

Then came the next assignment, designed to get us to delve even deeper. It’s all about change, the need to make changes to grow. However, I felt that I was already there: I had made the changes I needed to make (albeit not all on in time frame I controlled, as I have written about before). But I was now in the transition of moving from where I was, toward my vision of what I want to be. I was stuck. It was my wife who made a very insightful observation – that, yes, I am in transition but the transition is still change. Every day is a change as I establish my practice, take the coaching course and transition from being on the road all the time to being home all the time.  From this moment of clarity, I was able to determine where some of those blind spots might be, modify some existing beliefs about risk, and establish where I might need some reserves. Reserves are defined as “things” such as time, space, money, resources, opportunity, sales, people, supplies, skills, and knowledge, to name a few.

The concept of reserves in this context was new to me, but it makes sense. Having reserves in critical areas can make the difference between success and failure. The obvious reserve is money. By having a solid reserve in money, a source of worry is eliminated and you can concentrate on what you need to do, which in my case is building my coaching practice. Training is another area not often thought of as a reserve. But being trained in a variety of areas, skills or programs makes our offerings more dynamic and flexible, increasing the odds of success. Finally, White Space. This is a fascinating concept – creating space/time to put aside and then use for something, whether it is a personal passion or just time to think. I had a manager who once told us that we needed to put aside sometime each week just to think. It is one of the hardest things to do, because there always seems there is something “to do”. Actually scheduling that time on our calendars is a positive first step to making sure we have that White Space available.

For more information on the assessment and tools I reference, go to: www.coachingOutoftheBox.com and look for Personal Groundwork for Coaching.