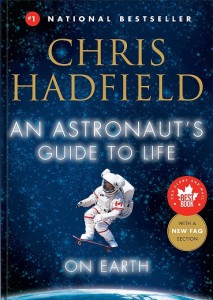 One of the better books ostensibly about leadership I have read this year is Chris Hadfield’s An Astronaut’s Guide to Life on Earth (Random House, 2013).  I didn’t start in on it with the expectation that it would enhance my own leadership, but as I often do during “down times,” I picked it up just for the sake of something to read. However, as I got into it, I kept coming across great nuggets of leadership wisdom. This should really not have been a huge surprise, as Hadfield wrote this book after returning from his mission as Commander of the International Space Station. It is filled with stories and insights into his training and development as an astronaut.

Marshal Goldsmith in his book What Got You Here Won’t Get You There (Hyperion, 2007) lists twenty habits that can hold you back from being successful. The very first habit is “Winning Too Much: The need to win at all costs and in all situations – when it matters, when it doesn’t, and when it’s totally beside the point” (p. 40). Hadfield recounts a great example of this when he discusses the competitiveness of being an astronaut, and the effects of having a group of highly competitive individuals spend a significant amount of time together in a confined space. He tells the story of when his son was 10 and proudly demonstrated to his dad how many laps he could swim underwater on one breath. Without thinking, Hadfield jumped in and swam one more lap that his son. He tells this story to demonstrate the destructive power of competiveness, how it affected his son, and what he (Hadfield) learned from it. What a great illustration of the trap we often fall into as leaders: wanting to show how good we are, allowing our egos to get the best of us. Hadfield discovered that, for his situation, leadership success was actually a team sport, and that it was “the ability to work in a team productively and cheerfully in tough conditions” (p. 104); that leadership is “leading the way, not hectoring other people to do things your way” (p. 105). You can’t always indulge your need to win as an individual, because doing that in space could lead to death for the entire team.  Outcomes on earth may not be that drastic, but consequences can still be dire.

Subcribe to my Blog