“Trust is at the heart of collaboration” Kouzes & Posner 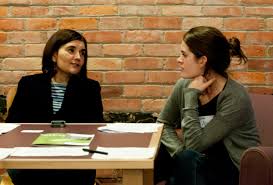 After a recent audited coaching session (a third party listens in on the conversation with permission from all parties to give feedback) the auditor asked me what I thought was my signature presence as a coach. I responded that I thought it was my active listen skills, which allowed me to “listen” for what was being both said and unsaid; allowing me to be “present” for the client. The International Coach Federation (ICF) describes the competency of Active Listening as, “[The] Ability to focus on what the client is saying and is not saying, to understand the meaning of what is said in the context of the client’s desires, and support client self-expression.” My reasoning for this answer to the auditor’s question was that Active Listening is something, historically, that I have forced myself to be aware of. It does not come naturally to me. According to my Social Style (Tracom), I have an Expressive behaviour style. This means that I act fast and am highly emotional. My tendency is to move to action quickly, often without getting all the facts and to react negatively when critiqued. I was once told by a former boss that my problem was a mindset of “Ready, Shoot, Aim”.  Being aware of this tendency, I have worked hard to slow down, temper or check my emotional state and force myself to be an active listener (listening to understand).

However, my auditor stated that during our audited coaching call, he observed a coach who created a trusting and intimate environment for the coachee. ICF defines this competency as “[The] Ability to create a safe, supportive environment that produces ongoing mutual respect and trust.” The auditor went on to state that he observed a relationship between myself and the coachee that had the strong evidence of a deep level of trust, that there was an honest relationship, that I was demonstrating integrity, confidentiality, respect and support as expressed in the ICF competencies. I was demonstrating what Neale, Spencer-Arnell and Wilson in their book Emotional Intelligence Coaching (2011) stated; “[that] behaving in a trustworthy way is essential for a coach”.

As I reflected on this I realized that I had listed Active Listening because my focus had been on that – that was my greatest concern and therefore, it was where my mind had been. This thinking was reinforced when I went back to the Excelerator Essentials Program handbook used in my training, and went to the section on Personal Goals for the Program, page (1.12) where I had written as my first goal, “Become a better listener by being more present, being less distracted by my own thoughts”. As I read this I realized that, although there is still room for growth in this area, I had moved forward enough that it was no longer my primary focus for learning and that this learning had added to what has become my signature presence as a coach, my ability to establish trust and intimacy with the client.

The auditor went on to comment that my demonstration of this “presence” was adding to one of the other ICF competencies, that of Coaching Presence. This resonated with me since that competency speaks to the ability to spontaneously and consciously create a relationship with a client. I have received similar feedback from a previous auditor as well as from other clients. As Neale, Spencer-Arnell and Wilson stated, it is not just important to be highly aware of your client but you have to also be highly self-aware, that a coach needs to be “…present, tuned into self and others”.

This exercise forced me to examine the qualities that I bring to a coaching relationship, and as I review the ICF Core Competencies I see that I am moving into a place where these are becoming part of who I am. I am creating an overall “presence” that is enabling me to get the best out of people. As one of my clients stated; “[John’s] approach forces you to really think about a situation and guides you to find a solution to your problems… It has greatly improved my personal and professional life”. As I continue to think about this it seems to me that having a signature presence of projecting trust and intimacy with a client opens the doors to deep conversations that then lead to significant, in-depth results, rather than merely superficial ones. It dawns on me that one of the reasons that I have developed this presence is because I have become an active listener, that I do listen without an agenda, that I am able to “hear” what a client is stating by tone as well as words, and if in person, by their body language. I understand that my training in Social Styles has not only helped me to understand myself but also to recognize how others want to be understood and that the CEC program has given me the tools to dig even deeper.

If coaching is a collaborative partnership between a client and their coach to uncover the impossible future (Hargrove), and trust is the bedrock of that collaboration (Kouzes & Posner), then a “slogan” for this posting is Collaborating Towards an Impossible Future.