It seems like only yesterday that I began my journey toward certification as a coach. One of the biggest lessons I have learned is the importance of having a coach. That might seem rather obvious — wouldn’t I be certain that coaching was an important process if I was entering the field? You would think so, however….

For the past six months I have been studying at Royal Roads University in their Executive Coaching program, which will give me enough educational credits to qualify at the PCC (Professional Coach Certification) level of the ICF (International Coach Federation). I specify that the journey was to become a certified coach because I strongly believe in the certification process, not only for “the piece of paper” but for what it represents. It tells the world that I have completed a process of study where others, in this case coaching professionals, have deemed that I have demonstrated the competencies and skills to do the same. It lends credibility not only to me but also to the profession. It sets standards, best practices and an expectation that continuous learning is a requirement.

There were two v 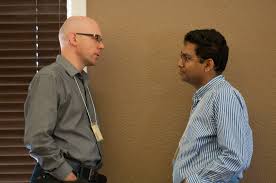 ery key experiences for me in the program, ones that might be called “Aha” moments. The first was having the opportunity to coach while having a third party “listen” in on the conversations. Throughout the program we were required to do eight of these “audit sessions”; six were on the phone and two in person. These were key because they gave me an opportunity to be critiqued on my competencies and to be provided with immediate feedback from both the auditor and the individual I was coaching. There was some strong learning going on in these sessions!

The second key was having the opportunity to be coached myself. Over the past six months I have had the opportunity of working with a couple of coaches. One was an alumna of the RRU program, who helped me get past some initial issues of confidence. The other is part of a coaching circle I joined. This second coach continues to help me figure out my business model and how to become successful.

It is said that if you want to find a good coach, find one who has a coach themselves. This past week I was asked to identify a change I have seen in myself over the past few months. My answer was my comfort level with being coached. Six months ago I was, at best, uncomfortable with being coached. I’m not really sure why except that I am uncomfortable being on the hot seat — it’s more about what others might think of me as much as anything. Over the past few months, though, I have seen, experienced and found the real value of coaching. Being able to find answers to challenges and to build actions to both face and overcome them can become transformative experiences. Being coached has also made me a much better coach myself!