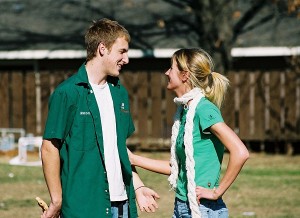 One of the biggest mistakes we can make – and believe me, I do this all the time – is making assumptions when talking to someone. You are going along quite nicely in a conversation, listening  intently and nodding in agreement, but all along making assumptions about the person’s the point or intention. We are listening not to understand what the other is saying, but to try and figure out what we should say next. It makes it all about “me” and not about “them”.  We project our perceptions and our reality on to the person to whom we are talking. The problem is, we all have a different set of realities and therefore perceptions of the world, and unless we recognize that, we get lost.

I spent last week with a group of people starting their journey of learning in the Executive Coaching program at Royal Roads University. We had the opportunity to watch several coaching demonstrations among both faculty and students. One of the most frequent comments was that as the coach, how difficult it was to stay focused on what the coachee was saying because we were already trying to formulate the next question, or were fighting the urge to give the coachee what we thought was our answer to their “issue”.

Assuming what the other person is saying, or the meaning behind the words they are using, can be a disaster.  Covey (1989) provided a habit in his book: The Seven Habits of Highly Effective People that he described as “seek first to understand, then to be understood” (p. 236) and described it as “the key to effective communication” (p. 237). If we want to have any sort of effective communication among ourselves, we first have to understand each other. And the simplest way of doing that is by asking questions. Sounds very simplistic, doesn’t it? It’s true and better yet, we can get better at it!

My intention for this post was not to provide a list of techniques to improve listening skills — there are a myriad of posts on the subject on LinkedIn and hundreds, if not thousands of other websites. Hundreds of books have also been written on listening skills, and yet it continues to be an issue. I would, though, like to offer one over-riding thought to the conversation. That is to be Present. Covey labelled it Empathic Listening (p. 239). Goldsmith (2007) stated that to “learn from people you have to listen to them with respect” (p. 148) and that “It’s not enough to keep our ears open; we have to demonstrate that we are totally engaged” (p. 149). I call it mindfully respectful listening. Along with Covey’s definition, which is to be “intentional” and “listening to understand” I would like to add the focus of reflecting back to the other person what they said as you heard it, not in their words but in your own, and to keep asking open ended questions to gain clarity, allowing for the silence between that is needed to reflect and ensure you understand.